To engage constituents and provide open and transparent communication.

You can scroll the shelf using ← and → keys

The students at Kennedy School enjoyed a highly interactive assembly today that tested their general knowledge in several different domains. The Wheel of Wisdom assembly emulates the game show Wheel of Fortune. During todays assembly the students competed against their classmates and answered questions to earn points. The team with the highest score won, the assembly ended with teacher teams who competed against each other. Both students and staff enjoyed the event as was evident by the smiles on their faces and the positive energy in the room! 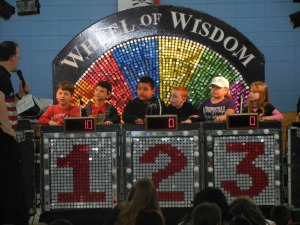